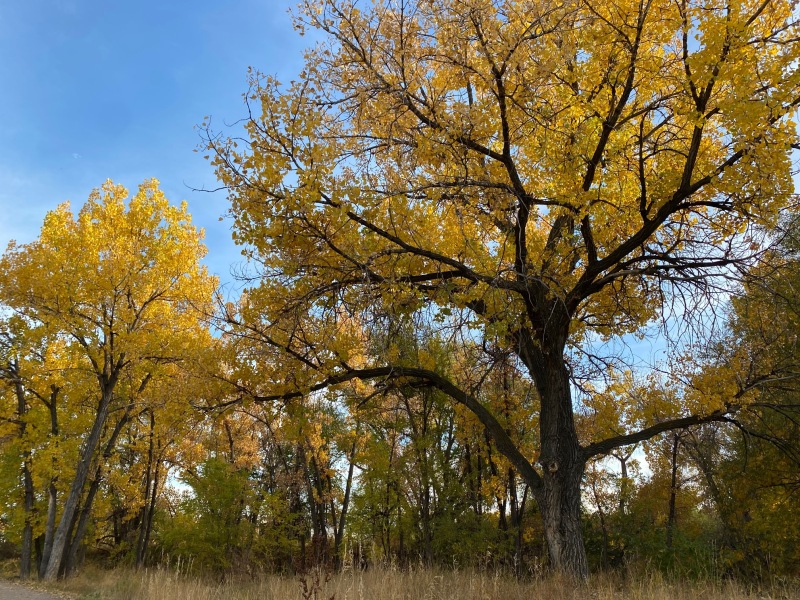 Ron and I have been walking everywhere lately. We’re trying to stay healthy and fit for our upcoming excursions in other places, and to get in better cardiovascular condition for ski season. We walk to the grocery, the dentist, the library. We walked our ballots over to the voting box this week for the election. It takes time to walk, and planning. But it resets the soul somehow, puffing out stress and breathing in the simple rhythm of walking upright.

But when I found a bike on Facebook marketplace for 40 bucks, I was ready to add to our exercise options. It was clear out in the suburb of Aurora, but for $40, we figured we could afford a road trip. We took the toll road that rings Denver all the way around to a place so far east it may have been Kansas. That added a few dollars to the bargain. The tolls in Denver are astoundingly pricey. (The toll from our house to where the bike was equaled $9.85!)

Ron still had his bike from 30-plus years ago. He dusted it off, greased it up and put the chain back on about 20 times during the first ride we took. No matter, our old bikes are seaworthy enough, not unlike the rather rustier ones we rode up and down the Gulf Coast in Florida this summer. (Grateful for those as I recall pedaling our way up Casey Key and wondering which mansion along the pristine beachfront was Stephen King’s writing alcove.)

It was in Florida where we re-ignited our interest in bicycling. It was primarily out of necessity since we didn’t have a car. But we enjoyed it so much. And now that we’re stoked on spokes again, this fall we have found Colorado to be, well, slightly hillier than Florida. In Colorado, even paths and roadways that appear flat from a distance have found us huffing and puffing in easy gears.

Though they are daunting, all the hillocks also promise fantastic vistas. Pedaling up the Rock Creek and Coal Creek trails around Lafayette has shown us giant cottonwoods turning yellow, deep blue Flatirons slanting upward, and Long’s Peak rising snowcapped in the distance.

I’m also excited to be perched high on my bicycle seat when we ride through some parts of the trails around here that lead through settlements of prairie dogs—little beasts I find unnerving at best. I have rodent phobia (musophobia), so the few moments when we are coasting through prairie dog towns are tense. And Ron knows that sometimes something as innocuous as a breeze, much less a rodent, can topple me from a bicycle. So, when we cruise through rodentville, he looks back at me frequently, knowing how much I hate it.

But the dogs just sit and rudely stare, silently threatening to pop up or down like weasels, or tarts. Their shadowy holes lie waiting to startle me like a jack-in-the-box or a whack-a-mole. But phobia or no phobia, we’ve had no incidents so far with these rodents. However, we have had a few minor maintenance problems as we get back in the groove of cycling.

Ron’s front tire deflated about a mile into one section of trail one afternoon. He had run over a couple of goat’s head weeds, also aptly named puncturevine, and well, his inner tube was tapped. I rode back the way we had come, and he walked his bike up to a trailhead where I eventually met him with the pickup truck. We drove off to Wal-mart for bike repair supplies, and Ron talked about how he had been impressed with the number of friendly offers of help he got while walking his flat- tired bike. He took it as a hopeful sign of humanity still left in our race. I hope he’s right.